It has been a while!

Well I know its been a while but I'm back and will be returning to blog on a regular basis with lots of crafty makes including papercraft, scrapbooking, home décor, mixed media and most important all of my projects using the fabulous Powertex!

I think, some of us, since we have had Facebook have neglected our blogs and posting our crafty makes and passing on inspiration and information.  I aim to rectify this and blog at least once a week! and will let you know so you don't miss anything!

As you know, I'm sure, my crafting has taken another turn as both Mark and myself have been involved in the wonderful world of Powertex! We have both become certified tutors and I have also had the privilege of joining the Powertex Design Team and also representing the company on HOCHANDA. My blog posts won't always be centered around Powertex but when they are they will also be published on the Powertex Design Team Blog so that all you lovely addicts can have a peep at what we have been doing.

Anyhow, to kick off re-starting my blog I am going to share with you a Powertex project that I have been working on for my show last week. 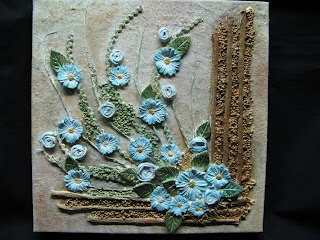 I have used one of the kits that we had on the show called the Home Deco Art set.  I have used a 30cm x 30cm canvas frame and then with my Bronze Powertex and my Stoneart powder I have created the Stoneart effect as the background of the piece.  The realistic effect that it gives you is incredible and I am loving working with these particular products to create the look that we have got. 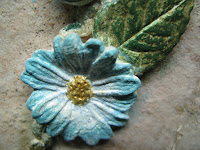 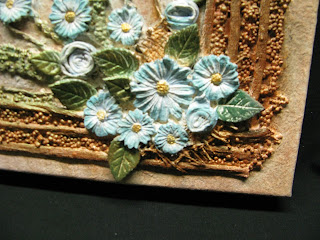 This is a couple of close up shots of one of the flowers that I have made to embellish the stoneart canvas.  The flowers are made from Stoneart clay which has been made using the Ivory Powertex and the Stoneart powder mixing equal amounts together and creating a clay that has a pastry like consistency. Keep mixing until your gloves (or fingers) do not stick to the clay and then you will be ok to start using the clay for whatever project you want.  In this case I have used the Daisy and matching leaf moulds that are exclusive to Powertex and can be found on their website.  (When using Ivory Powertex to make clay it is also suggested that you mix in a little of the Translucent Powertex with the ivory as this helps with the correct consistency.) The clay will last for several weeks if you keep it in a airtight container so if you mix too much up keep it for another project.
I left the flowers and leaves to airdry for a few hours and then used by Powertex Powders mixed into a little Ivory Powertex to create a lovely powder blue colour and then sponged this on to colour up the Daisy flowers.  The leaves were done in a similar way using the Green powder and then dry brushed over using some of the Colourtrix Green which gives this fabulous colour. I just added a little yellow to the middles to finish the flowers off.
For the rest of the canvas I used texture fabrics dipped into Ivory Powertex and also a variety of sizes from the sand and balls kit to add interest and lots of dimension.
I hope that you have been inspired to have a go at the Stoneart both for making backgrounds and for making clay to make embellishments and more texture to your projects.
It really is a lovely project to get your teeth into and the end result is so satisfying!
Please send photographs into the Powertex Addicts Facebook page to show us all what you have been getting up to, we love it when everyone shares their work.
I will be back with another project soon but, for the time being, enjoy your crafting and
bye for now,
Jo x

Jo Channon
Tattershall, LINCOLNSHIRE
Hi my name is Jo and I am a Craft Addict! Mark and I own our own craftshop in Tattershall, Lincolnshire where we have an amazing array of craft products and where we hold regular craft workshops which are very popular. We also have a very full and busy Website letscreateartandcrafts.co.uk. In the past I have enjoyed dressmaking and cross stitching but also found the very addictive papercrafting. Over the last year another amazing product has totally taken over all of our time - Powertex! Mark and I are now both qualified tutors and we are also Powertex stockists for the Lincolnshire area in our shop "Lets Create". I am also very privileged to be a Member of the Powertex Design Team 2017. In May this year I will be joining the HOCHANDA team demonstrating Powertex products.